From the origins of DS-Max up to the business model used by its descendant companies today.

Founded in 1975 in Canada by Larry Hahn, WMI was a retail business that went door-to-door selling products such as perfume, toys and luggage.[1] With no financial support or education, Larry spent several years training new recruits while living out of his car. By the 1980’s there were thousands of distributors. Recruits were promoted based on their sales, with sales following the Law of Averages (the more doors you visit, the more sales you’ll get). Convicted of tax evasion, WMI was forced to leave the country. The distributors had a choice: relocate to the US or be out of a job.

In 1980 former WMI distributer Murray Reinhart decided to start his own company – Wholesale Warehouse Industries – despite being heavily in debt.

WWI was largely a carbon copy of its predecessor. Instead of altering WMI’s formula, Murray sought to eliminate the racial discrimination he himself had faced.[2] Murray focused on the power of positive attitudes when selling. Promotions were now based on building a crew of five leaders rather than sales.

Murray recruited fellow Canadians Larry Tenambaum and Avie Roth, later known collectively as ‘The Big Three’. Selling pots and pans bought from wholesalers at heavily marked up prices, Murray found that customers were influenced more by enthusiasm than price. The Big Three would train up to ten salesmen per day. As their revenue increased, so did their buying power. The greater the profits (and therefore volume discount) the cheaper the goods. Eventually they could afford a suite in an industrial park.[3] Soon the direct sales workforce became more efficient and productive, and Canada became saturated with offices. By 1986, WWI had started its international expansion.

DS-Max (Direct Sales to the Maximum)

While previously only clearance items had been resold, DS-Max now started manufacturing their own products. DS-Max sprouted factories, bought patents and rose fields. Distributors would pitch to business owners and leave shelves of products in their locations. The Big Three had proven that a good attitude could sell anything, to ‘sell the sizzle, not the steak’.

By the mid 90’s, offices were grouped according to the products and services sold. The backbone of the company, selling DS-Max products, became The Clearance Division. There were the Roses Division, the Aliron Division, the Books Division and many others that no longer exist.

The Adverting Division would henceforth represent third parties instead of exclusively their own product line. Employees named ‘Listers’ would seek out small businesses and propose advertising campaigns. The New York Yankees campaign marked a turning point. In the early 90’s, while the Yankees were struggling with ticket sales, DS-Max listers proposed a ‘buy one get one free’ coupon. The Advertising Division sold the coupons, kept the profit, and within one baseball season had filled 150,000 seats.[5] DS-Max began to gain traction.

Other DS-Max Divisions only dealt with immediate transactions of money in exchange for goods, but now The Communications Division would sign up customers to contracts for subscription-based services.

AT&T was the first client for The Communications Division. The campaign proved so successful that AT&T formed a new department to deal exclusively with DS-Max applications. Today, what would became Cydcor is responsible for over 41% of AT&T’s overall clientele.[6]

By the millennium, DS-Max had a net worth of $75 billion, 15,000 offices worldwide and 2.2 million independent distributors.[7] Murray said that his company offered “the greatest opportunity in the world.”[8]

In 2005, due to negative publicity, the DS-Max organisation divided into its descendant companies. All direct connections with DS-Max have been severed, and the ‘DS-Max’ moniker removed from all company names. Instead, each division now promotes their own identity.

The Clearance Division spun off and became Innovage. The company purchases “millions of pieces of merchandise from partners like Disney, Warner Brothers and Vivitar” from thousands of factories, sourced by Three Sixty Sourcing Ltd.[9]

The Communications Division became Cydcor. Cydcor still signs up customers for monthly services. They serve clients across North America, including ATT, Sprint, Visa, MasterCard, CSI, DTV, Optus and many others.[11]

Another notable mention is the Appco Group (The Cobra Group), a Sydney offshoot founded by an employee of DS-Max in 1980s, Chris Niarchos. It is now primarily based in the UK. The Appco Group is a “billion-dollar group of diversified companies” with “more than 800 offices in 26 countries on five continents”.[12] Clients include npower, Sky, British Red Cross, American Express and Coca-Cola.

Murray Reinhart has retired from the business but occasionally delivers motivational speeches at conventions. [13]

Each descendant company of DS-Max has a loose confederation of international sales offices.

Each sales office is an independently owned and operated limited company, legally bound to the descendant company only through a marketing contract. Therefore the DS-Max descendant companies remain insulated from any legal or financial liability, making guidelines on ethical conduct difficult to enforce.

Recruiting is done in the name of the affiliated limited company and any discredited company names are immediately changed. This makes it difficult to establish a connection between the independent sales offices and a descendant company, as well as challenging for prospective employees to discover bad press. However, similarities in business practices often indicate an affiliation with a DS-Max descendant company. 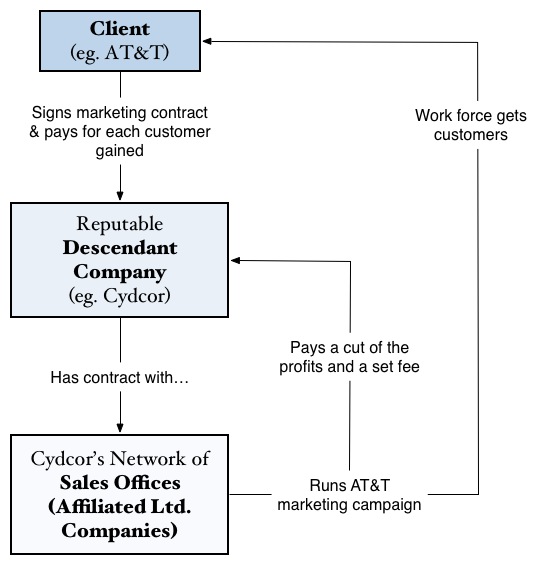 Suppliers, such as Innovage, supply merchandise to their sales offices. Innovage employees coordinate shipping and storing of products. Sales and marketing companies, including Accpo Group, The Smart Smile and Cydcor, are ‘Listers’. Their employees find client leads for their sales offices. Clients such as AT&T sign a marketing contract with a reputable descendant company, which in turn outsources the contract to an affiliated sales company. All main offices of these descendant companies also process paperwork, admin, bookkeeping and some legal expenses. All affiliated companies pay their descendant company a set fee for this work, plus a cut of their profits in exchange for access to their clients and/or merchandise.

A different kind of MLM

The DS-Max Marketing Scheme classifies as multi-level marketing since products are directly sold to the customer. It does not, however, classify as an illegal pyramid scheme since profits are not made from participation fees.[14] There are several key differences that set it apart from other multi-level marketing businesses:[15]

Certain practices employed by Multi Level Marketing companies have also been criticised for being cult-like. Roland Whitsell, a former business professor with 40 years of researching multilevel marketing claimed that “You’d be hard-pressed to find anyone making over $1.50 an hour…The strongest, most powerful motivational force today is false hope”.[22][23]

DISCLAIMER. Find my full list of references on the References Page.